Mythgard's robust tournament client puts a lot of power in the hands of anyone who wants to organize a tournament. One of the more important choices you make when creating or playing in a tournament is understanding the Deck Style the tournament will use. Here's a primer for those unfamiliar with the various styles of deck selection.

Conquest is a multi-deck format. In this style of tournament, players submit three different decks. Before each match, each player is presented with the decks of their opponent and selects one to ban.

Players select one of their available decks before each game. When a player wins a game, the deck they used is disabled and cannot be selected for subsequent games that match. Should the game end in a tie, both players' decks are disabled. If all of a player's decks are disabled and a match is still ongoing (which can happen in a best of seven series) all decks are re-enabled.

One important thing to note about multi-deck formats is that ALL of a player's decks are built with the same card/path/power restrictions of a single deck. For example, a player cannot submit a deck with 4 copies of a common card if that same common card is in another of their decks. They can, however, submit 2 decks with 2 copies each of that common card.

Deck submission works a bit different for Conquest and the Last Standing game modes. The Deck Editor will have different tabs in it for each of your decks. 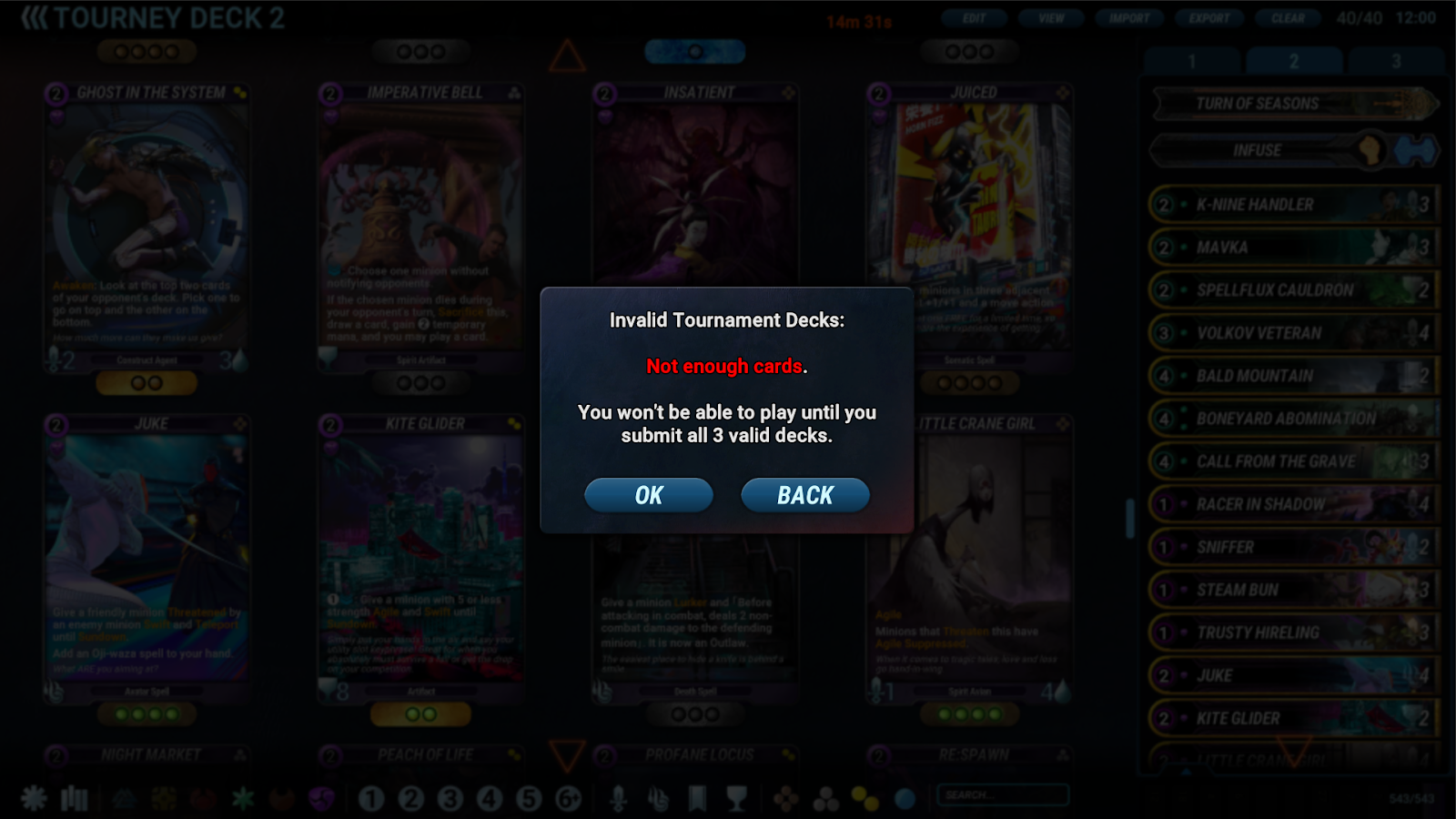 If you are unsure whether or not you've submitted all of your decks, you can check in the tournament UI to make sure you're ready to go. Unsubmitted decks will be faded orange to show their incomplete status. 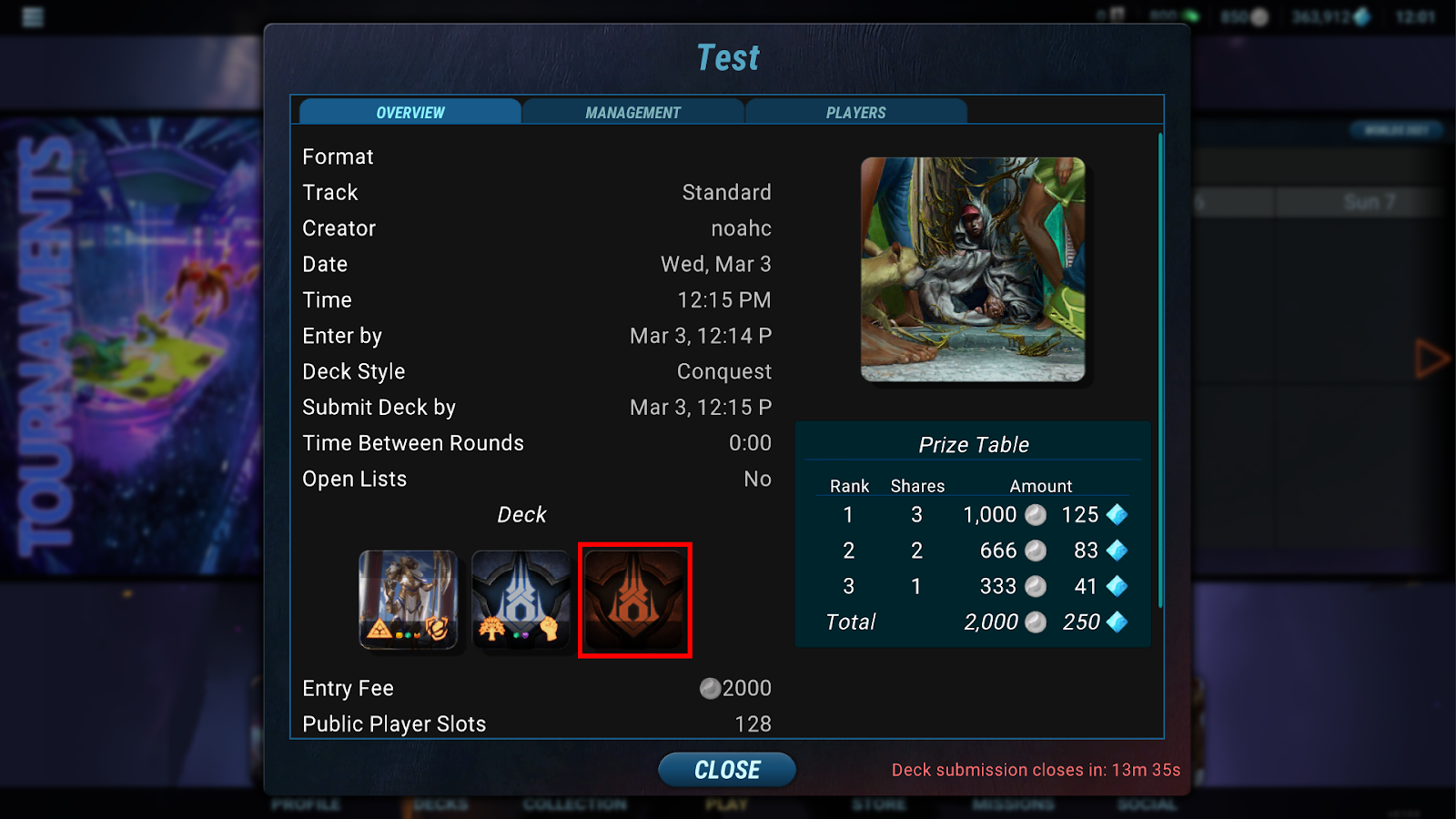 When all of your decks are submitted successfully, you should see no deck slots that are faded orange. 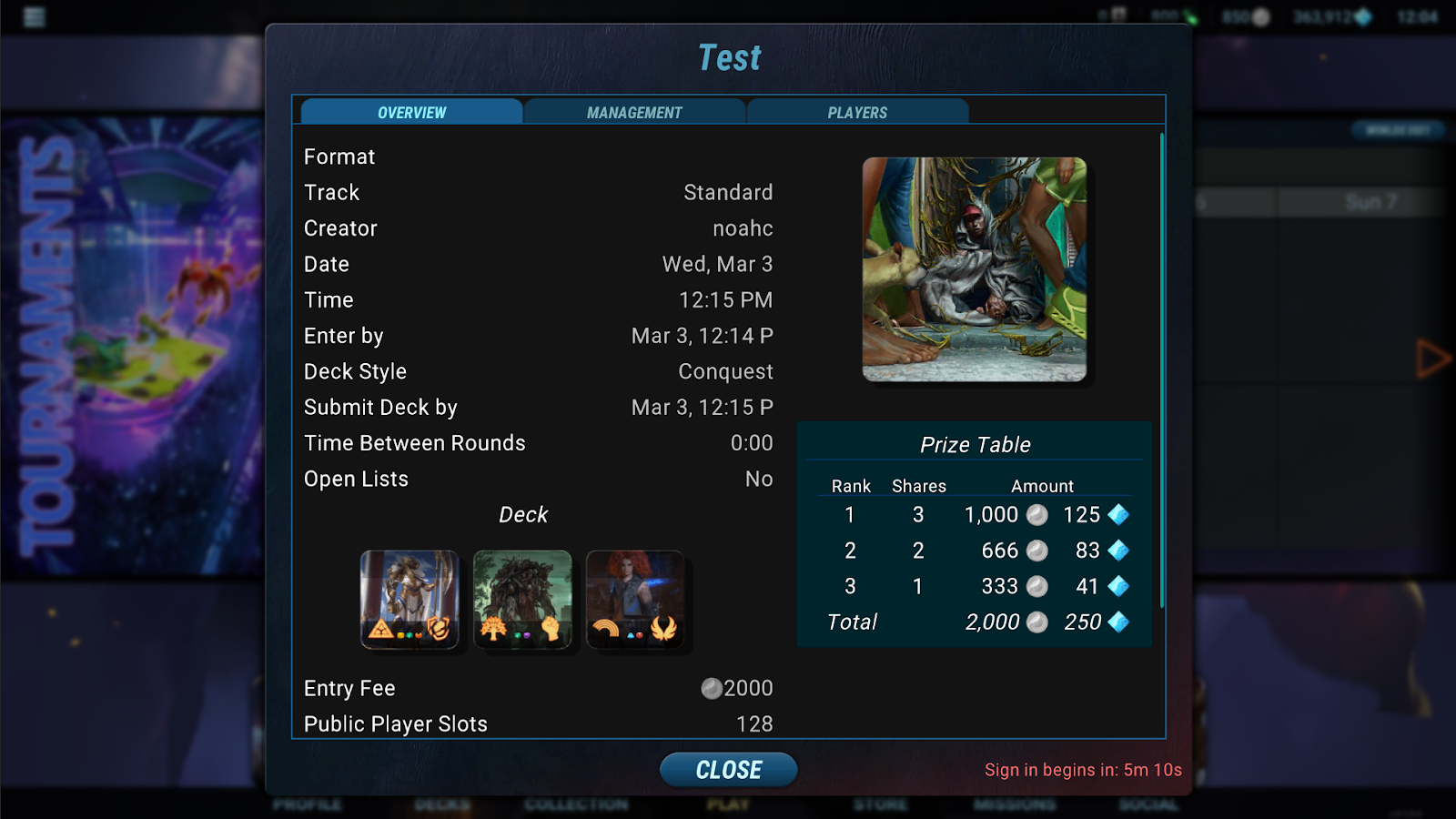 Last Standing is another multi-deck format. In Last Standing, all of Conquest's deck building rules apply. This means you can't run more than 4 cumulative copies of any given common card, multiple decks are submitted, etc. At the start of each match, each player is presented the decks of their opponent and selects one to ban.

Before the first game in a Last Deck Standing match, players choose one of their decks to use for that game. The loser's deck is disabled for the remainder of the match. Should the game end in a tie, both players' decks are disabled. When a player wins a game with one of their decks, they will play that same deck again in the following game of that match. The loser of the previous game (or both players if they tie) must choose new decks for the following game. Should all of a player's decks be disabled and a match is still ongoing (which can happen in a best of seven series), all decks are re-enabled.

This deck style should be the most familiar to Mythgard players. In a Single Deck tournament, players enter with one particular deck and use that deck throughout the entirety of the tournament.

While not yet implemented, this is one of the most recognizable tournament formats for most card game players. In the Single with Sideboard format, players submit just one deck for use during the tournament. However, unlike a standard Single Deck format, each player has access to a selection of cards called a "sideboard" that they may replace other cards in the deck with between games. Game 1 of each match will always be played with the deck list as originally submitted and the sideboard will be available for subsequent games in that match.

Note that draft tournaments are played in a similar fashion in that players use a single deck that they can modify (with any of the cards that they drafted) between games.